The two leaders discussed matters related to the Ukraine war, the North Korean issue and the 2023 G7 meeting, which Japan will be conducting in Hiroshima in the month of May. The visit of Kishida is of great importance as East Asia has been under continued instability courtesy of Pyongyang’s belligerence through its continued testing of ballistic missiles since 2022, the last being on January 1, 2023. The rising North Korean problem is of paramount importance to Japan as some of the ballistic missiles recently have fallen into Japanese waters.

The outcome of the meet

The two leaders had a discussion on North Korea, China, and Russia with an aim of turning Japan into a Military power to counter China in the region. President Biden said that the USA is committed to the safety of its allies and is bound to protect them at any cost. President Biden also said: “We are modernizing our military alliance, building on Japan’s historic increase in defence spending and new national security strategy.” Following that PM Kishida said his administration had decided to take major steps aimed at “fundamentally reinforcing our defence capabilities,” including increasing military spending and growing the nation’s missile strike abilities.“I believe that this will be beneficial for the deterrence capabilities and response capabilities of the alliance as well,” he said.

Prior to the meeting with President Biden, Kishida met with leaders from the UK, Canada and European countries. He also signed the Defence pact with them in London. The western governments said in their joint statement that they would build on prior economic cooperation to “sharpen our shared edge on economic security, including protection and promotion of critical and emerging technologies, including semiconductors.

Challenges for Kishida back home

1) Political Problems – The conservative church saga: The Political Party of Kishida (LDP) is in transition after the death of former PM Abe. After his demise, Fumio emerged as the party head but the party has been in controversy in Japan as its leaders have been involved in the conservative church saga. The matter came in limelight after Abe’s demise when his killer said that he targeted Abe because of his association with the conservative Church. Many other prominent LDP leaders have also been found to be associated with the church. One such LDP leader was Daishiro Yamagiwa who forced Kishida to change his portfolio and even asked his political party members to cut off ties with the Conservative church. This plummeted his approval ratings which went down to 29% in the month of December 2022 increasing his political challenges.

2) Economical problems – High Inflation and Low Growth: Japan witnessed its highest inflation in a decade in the last quarter of 2022. Economists say this was the highest inflation rate in almost 4 decades. Along with it, there are various other problems like stagnated growth, supply line disruption, an ageing population, and semiconductor shortages that may take the technology and manufacturing sectors in Japan adrift.

3) North Korean belligerence: Since 2022, Pyongyang has conducted dozens of ballistic missile tests and launches. Japan even said that they are preparing themselves for 7 nuclear tests. Such has been Kim Jong Un’s agenda in East Asia that some ballistic missiles have even landed in Japanese waters, posing a grave threat to its security.

4) Standoff with the Chinese: Japan has suffered from Chinese aggression in the past and the standoff in Senkaku in the Ryuku island chain, along with the former’s attempt at unilateral changes in South China is a testament to that. Moreover, China’s obsession with Taiwan and its belligerent behaviour to achieve that have created instability in East Asia, particularly in the Taiwan Strait, where China has been violating the airspace of Taiwan frequently. Former US Speaker Nancy Pelosi visited Taiwan in 2022 on a historic trip to show support for Taiwan. China reacted with never-before-seen military exercises close to Taiwan. These developments are very concerning to Japan, forcing them to boost their military might.

5) The Russian problem: Japan also has territorial differences with Russia in 4 islands situated in the Hokkaido island chain. Its differences with Russia have an interesting history. During PM Abe’s tenure, both countries showed interest in resolving the conflict through diplomatic means. This changed after the coming of Kishida, who is pro-US and even supported Ukraine outrightly in the war. Japan under Kishida imposed economic sanctions against Russia and even declared a Russian diplomat Persona non grata. This has frightened Russia and allowed the Russian offensive on the disputed Kuril island where Russian ships have been seen near Japanese waters, adding to another set of tensions for Kishida.

6) Strained ties with South Korea: Both Japan and South Korea are under threat from Pyongyang and Beijing. However, both are close allies of the United States in Asia and the Pacific. Despite that, both countries don’t share a healthy relationship. Present-day South Korean President Yoon Suk Yeul has promised to improve ties with Tokyo, but very little has been fulfilled.

The challenges for Kishida are many but the recent decisions made under his administration suggest that he is also ready for challenges. Japan has drastically increased its military budget, which is expected to increase by 56% in the next 5 years, which would be the highest increase since World War II. Furthermore, Kishida has said that Japan’s military spending would be 2% of its GDP by 2027. Japan would also be working to develop hypersonic missiles by 2040. Looking at all these developments, Kishida’s this trip to the United States had a lot at stake for Japan. If Japan is able to implement the promises made in the military sphere, it would be a huge gain for Kishida who can further solidify his place in LDP and also take Japan to the prominent position in Asia that it deserves. 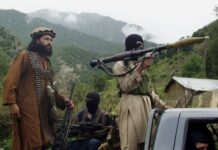 Sudhir Narasimhan - February 19, 2020
For India has been denying for the past seven decades, that Pakistan and Bangladesh are engaged in the ethnic cleansing of their Hindu minorities,...

A Semiconductor Material Better Than Silicon?