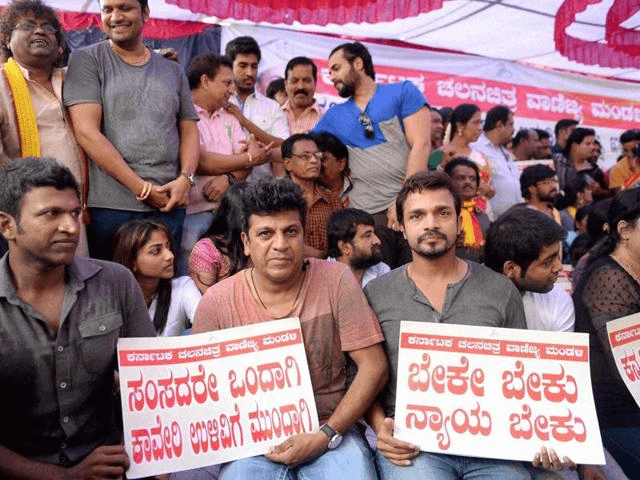 Media should desist from taking sides and justifying acts of violence and vandalism promoted by politicians and perpetrated by anti social elements.

The media needs to be careful while covering protests that happen in the name of a language. Recently a bunch of Kannada vigilantes who attacked a Jain community in the name of the language tore the papers and literature written in Hindi. Later, in the name of protesting against Hindi imposition on Kannadigas, they set ablaze a few vehicles. In the past when the issue of sharing Cauvery waters came to the fore, these vigilantes set vehicles bearing Tamil Nadu registration on fire. More recently when the Enforcement directorate acted against D.K.Shivakumar for financial irregularities, the vigilantes perceived it as an assault on Kannadigas and ended up destroying precious public property.

When I see the media reporting incidents like these I believe that our TV channels and other media being pretty irresponsible. A TV channel reported that the vigilantes “expressed their ire by throwing stones at public property and burning some vehicles”. But by projecting these illegal acts as a natural response to the happenings that rile them sucks big time. The media organizations are empathising with vigilantes who are no better than common criminals and vandals. For instance, how does it feel if some media reports that by bombing Charlie Hebdo the terrorists expressed their anguish? We can agree these vigilantes didn’t take lives the way the terrorists did. But is it nice on the part of the protesters who destroyed trucks bought by people who took loans to buy a truck and bet their livelyhoods on them?

It’s unfortunate that Kannadigas suffered when the Cauvery waters were shared. It’s nice that common people protested it in a peaceful way. But some antisocial elements took advantage of these sentiments and went on a destructive binge. But our media houses projected the violence as an expression of the anguish that Kannadigas had about the Cauvery issue. In other words, they justified the violence. The kind of reportage they carried out projected a wrong image of Kannadigas to the people who were tourists and visitors to Karnataka.

Even at times of strife like these humanity takes over. For instance, an old Tamil lady who was caught in the middle of the violent turmoil between Kannadigas and Tamils was rescued by common folks. Kannadigas also rescued many other ladies from the mob fury. Stories like these were buried by our insensitive media. It’s possible that you helped your Tamil neighbours and friends. You might have asked them to take your KA registered vehicle and instead of their TN registered car. You might have helped them procure essential goods in time of strife. This is the way lakhs of Kannadigas responded to Tamils in the days of strife. And this is how they responded to north Indians in the days the anti Hindi agitation took over. This is what the world had to know about Kannadigas. But what happened?

The way I understand the media response to these incidents is that they came out with an `ideology of crime’. In other words, they justified the illigal and illegetimate acts that were happening by viewing them in an ideological perspective. They linked the incidents to an ideology of their choice and spewed opinions at the public who deserved an objective reportage. Our so called intellectuals justify the violence perpetrated by the Naxals and their pitch about exploitation by throwing their ideology at us. Muslims justify their ideology by supporting the acts of terror perpetrated in the name of religion. Our media has exactly done that in the context of language related protests. Crimes like setting on fire lorries with Tamil Nadu registration were redefined as protest against the verdict of the courts. The media also tried telling us that these destructive acts were normal in the course of a protest. Such a stance by the media triggered more violence which included the attack on the Jain community and other violent activities that were carried out in the name of the corrupt leader D.K.Shivakumar.

If our TV channels had not repeatedly telecast the acts of vandalism and projected them as a form of protest, the home ministry could have swung into action and brought the situation under control. But the media incited violent acts with their footage of vandalism which wreaked further havoc.

These so called protesters also take law into their own hands and unleash violence on those who criticise the Kannada related violent protests. And no media, whether it is television or print oppose these acts. They just interpret these acts of migrants and say that the Kannadigas taught them a lesson they can’t forget. They often tend to forget there is a legal way to address these issues and vigilantism is no solution.

There are hundreds of thousands of Tamilians there who strive to help Kannadigas feel a sense of security during these tough times. Such issues escape the eyes of the media. They are myopic in the sense that they see only the violence and vandalism carried out by the protesters against our buses and other vehicles. Consequently we end up painting a wrong picture of Tamilians, judging them only by a few stray incidents that would have offended Kannadigas. They are essentially blaming one another for the criminal acts. The media from north India is no different. All of them just make excuses of one another’s crimes to justify a crime.

Prathima - December 8, 2020
Akasha or Space is the most subtle of the Vedic five elements, which indicate all the levels of manifestation from the immaterial to the...

Why Sri Krishna is the Avatar of Yoga?