Women are born with responsibilities that follow them as shadows. Every step a woman takes should be thought through and carefully taken as it may either lead her to happiness or her doom. Following these steps she often fails to understand true happiness and strength that is within her. Realizing her strength or Shakti is important to have a life of abundance not only for her but also for all those around her.

In Hindu culture, the girl is given the highest place both within the home and outside. She is considered as the pillar of the house who willingly dedicates her life to the wellbeing of her family. This has drastically changed over time as she has been cursed, hurt, abused, and tortured both physically and mentally. The rate of crimes committed against women is also going up by the day.How did our society, which deifies women become so intolerant, and how do we deal with this?

We are still in a patriarchal society where parents pamper their sons while heaping responsibilities on the daughter. Her parents mostly regulate a girl child’s life and future. She’s told what to wear and how to conduct herself in public. With a few exceptions, in most families parents decide her future course of life including her marriage. This form of suppression makes women lose confidence and faith in themselves.

A woman has different roles that she plays in her life starting from being a daughter, a sister, a friend, a wife, and finally a mother. She is the strong foundation of any family; So it’s important that she remains strong to balance her family both in happiness and sorrow. Any impediments in her life can have a major impact on the way she sees herself and life. Every girl struggles in a lot of ways both physically and mentally. When a girl is strong, she can come out of any struggle and even get justice for any wrong that happens. On the contrary, if she is not strong, doubt clouds her judgment which makes her take drastic steps like torturing herself, undergoing acute depression, and sometimes end her life.

Our society worships goddesses and considers the land where they live as the motherland. Despite this, we fail to give the desired respect and freedom to women. Every woman goes through a period of struggle at some time in her life; it can be for her education, for the job, for marriage or for her honor. Family members play a major role in how a girl reacts to a particular situation that she faces in her life. If she gets the needed support she can come out of it with ease and if not she may or may not come out. So, it becomes important that the people whom she trusts and is in frequent contact should support her and give her encouragement.

Physical abuse, eve-teasing, differentiation between children, status, rape are some of the things that a girl goes through which leaves her either traumatized or scarred. All these have an irreversible impact on a girl. But, this should not be the end of her life. This is where she needs to remember Goddess Kali who to maintain peace in the world took a form that was so powerful that the one who stood next to her was burnt or destroyed. Every girl has Kali, the power inside her, which is based on the turn of events,which she forgets. This strength which is hidden and forgotten should be brought out and practiced every day which helps her to win her battles in life.

Understanding and believing that she is strong and she can fight against any crime that is happening in her life is very important. Realization of this can be built with the help of her parents, friends, self-realization, and self-belief. She needs to understand her strength instead of concentrating on her weaknesses. Thinking she is a girl and hence she will not be able to defend herself is a step in the wrong direction. She can discover her power by self-realization, and find it somewhere deep within her. Loving and caring for her instead of cursing her is the need of the hour.

Simple steps can be taken which help her to understand who she is and what her powers are. Penning down what she likes, her interest, strength, and weakness provide her with clarity. Exercises such as spending time with herself and regular workout help her to stay calm in any situation and think right. She can start following her heart to know what she wants to do and how she wants to lead her life. Meditation also plays a major role in strengthening her. Speaking about the things that are bothering her to close confidants could help her and save her life.

The boys should be taught to respect and protect a girl’s rights from a young age. They should respect not only girls who are their sisters, mothers, or wife but all girls in general. This should become the first lesson for every boy in every household.

Respecting and appreciating girls doesn’t disturb their manly image, instead it will make them a better human beings. 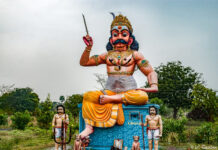 The Flow Of Soma

Prathima - November 27, 2020
The Vedic ritual reaches its climax in the Soma offering, in which specially prepared plant juices are offered into the sacred fire (Agni) as...