The Ministry of Defence of India has undertaken useful initiatives in engaging with partners mainly on a south-south basis over the last year. The Indian Ocean Region Defence Ministers’ Conclave held on February 4, 2021 alongside Aero India 2021 was one such initiative. A similar initiative had been taken a year ago, in Lucknow, on the sidelines of the Defexpo when Defence Ministers of African countries had been invited for the first ever India Africa meeting.

Enhanced peace, security and cooperation in the Indian Ocean was the theme of the Conclave. Despite the pandemic, 26 out of 28 invited countries participated, some physically, others virtually. Several ministers and service chiefs actually participated by coming to Bengaluru. Several diplomatic representatives of countries also participated. Maldives, Comoros, Iran and Madagascar were represented by their ministers. A year ago, 14 Defence Ministers from Africa with 18 Service Chiefs had been among the 38 participating countries at the India Africa Meeting. Between both meetings substantial space has bene covered.

While the Lucknow Defence Ministers’ meeting was focussed on Africa, the present conclave focussed on the Indian Ocean region which is important as part of India’s Indo Pacific engagement. The Indian conception of the Indo Pacific extends from the eastern coast of Africa up to the Pacific and is among the few such concepts that actively include the African coast line and the island countries.

Besides the Indo Pacific policy, there is also the overlapping with the Indian Ocean Rim Association (IORA) which was formed by an initiative of India and South Africa in 1997. The IORA has flourished for over 20 years and it now has 23 members and nine dialogue partners. France was the last country to be accepted on the basis of its territory of Reunion in the Indian Ocean. These 23 countries form the basis of the IOR that India seeks to link with through this conclave.

The inclusion of the four island African countries of Mauritius, Madagascar, Comoros and Seychelles is important to Indian policy. Besides, South Africa, Mozambique, Tanzania, Kenya and Somalia on the eastern coast of Africa were also invited. Four ASEAN countries, including Thailand, Singapore, Malaysia and Indonesia and from West Asia, Iran, Yemen, Oman and the UAE add to the complement. Sri Lanka, Maldives and Bangladesh from India’s neighbours complete the list of partners which also include Australia and France.

Thus, between the Indo Pacific concept and the IORA membership, India neatly created a conclave of Defence Ministers of the Indian Ocean region without making it an event of IORA but underlining the importance of these countries in the Indo Pacific context. Of all Quad countries India has the most benign and friendly engagement with the countries of the Indian Ocean Region. As the Raksha Mantri noted in his speech at the Conclave, as the largest nation in the IOR region with a vast coastline of 7500 Kms, India has an active role to play for peaceful and prosperous co-existence of all countries. SAGAR – Security and Growth for All in the Region is the theme of Indian Ocean Policy as outlined by Prime Minister Modi in 2015. India’s approach and vision to tackle global challenges was highlighted by the dynamic five ‘S’ vision – Samman (Respect), Samvaad (Dialogue), Sahyog (Cooperation), Shanti (Peace) and Samriddhi (Prosperity). He had then observed that ‘Together, we have demonstrated our mutual respect for a rules-based order, setting an example of how abiding with international law will enable harnessing the global commons for the good of all.’

While the strategic sense of the region is becoming self-evident, what India showcased were three significant aspects of its commitment to foster peace and prosperity in the region.

The first is readiness to convert its exhibition of its indigenously produced military hardware into a willingness to provide it to strategic partners in the Indian Ocean region. Through various exhibitions like Defexpo, Aero India and the like in recent years there was considerable interest in Indian capabilities by countries of the region. They are impressed by India’s capabilities of domestic production. The Raksha Mantri’s clear statement that “India is ready to supply various types of missile systems, light combat aircraft, helicopters, multi-purpose light transport aircraft, warship and patrol vessels, artillery gun systems, tanks, radars, military vehicles, electronic warfare systems and other weapons systems to IOR countries,” has created an impetus for their marketing.

India’s ability to export in sustainable numbers is now becoming clear. This is bound to generate more interest in the region. It is evident that India has confidence in its own capabilities and at Aero India, the announcement of an order of 83 Tejas aircraft is a manifestation of India’s firm commitment to buy its own production. India is known for being a major importer of armaments but signalling that its own defence capabilities would be augmented by indigenous research, development and production is an important confidence building sign.

Even at the Lucknow meeting, African Defence Ministers had also called for deeper cooperation in the domain of defence industries including through investments, joint venture in defence equipment software, digital defence, research and development, provisioning of defence equipment, spares and their maintenance on sustainable and mutually beneficial terms. They acknowledged the strides made by India in the field of defence production.

Secondly, there is a determined push by the government to enhance exports of defence production institutions in India. This welcome sign will help various production facilities acquire a larger market outside India which will improve their balance sheets and give them the strength to challenge international markets. This opportunity needs to be fully grasped to augment India’s overall export thrust and transition to a $ 5 trillion economy.

Thirdly, the defence production facilities of India now have a clear political backing for exports. The ambivalence appears to have diminished and Raksha Mantri’s clear statement will go a long way in encouraging them. It is now time for an economic backing to defence exports. India often uses grants of the Ministry of External Affairs to provide defence equipment to friendly countries like Mauritius, Seychelles, Mozambique, Myanmar, Bangladesh and others. The commercial purchases have been at lower ebb with Vietnam using part of its lines of credit for some purchases as has Mauritius. Most countries today, are apprehensive of increasing their sovereign debt by using credit lines however concessional they may be. For infrastructure and industrialization, they prefer PPP models. For the social sector including public health there is a willingness to borrow but a greater dependence on grant funding is seen. India has large commitments to provide lines of credit particularly to Africa and many countries on the Indian Ocean Rim. They could be persuaded to utilize these to buy equipment since defence would always require a sovereign debt rather than the possibility of public private partnership or FDI.

Many countries on the Bay of Bengal side and beyond have adequate defence budgets to diversify their imports and would be interested in the Brahmos and Akash missiles, the patrol boats, and the artillery and trainer aircraft besides helicopters. The diversification that countries like Indonesia, Vietnam and Philippines are undertaking provides us an opportunity to undertake such efforts.

A combined political and economic push to expand defence exports to strategic partners will not only improve the economic stature of defence PSUs in India but also will create deeper strategic engagement with countries of the Indian Ocean region.

The Government’s direction to Defence Attaches to become more savvy marketers of Indian defence equipment will yield results. As the placement of these attaches is rationalized the objectives will also be better realised. The idea is that the defence requirements of our partners need to be assessed and India can step forward to strategically fulfill these aspirations through exports of required items. A component of training as a grant can be provided with maintenance being a part of the economic package.

Strategically, India does not need to be competing with any country in this segment. It is nontraditional threats, not international competition that the countries in the IOR are more concerned with. The piracy in the Western Indian Ocean, the HADR in Africa and in ASEAN, the counter terrorism and counter action against drugs and illegal migration are all well served by the appropriate Indian equipment. In IOR region India is providing Humanitarian Assistance and Disaster Relief (HADR), Non-combatant Evacuation (NEO), and Search and Rescue (SAR). India is developing a comprehensive Maritime Domain Awareness picture in the IOR, which has resulted in signing of Technical Agreements for sharing of ‘White Shipping Information’; our partners appreciate that India does not seek an either/or engagement.

This message is consistently given by India and was reiterated at the IOR Conclave. Through this India seeks to promote the objectives of SAGAR and the Indo Pacific Oceans initiative which are partnership rather than unilateral models. India’s willingness to export defence equipment is not to strengthen any capability against third countries but mainly to contain and counter nontraditional threats and deal with coastal security, disasters, terrorism, piracy, pollution and illegal actions. This gives maritime security cooperation a better construct and is wisely pursued by initiatives like the IOR Conclave. 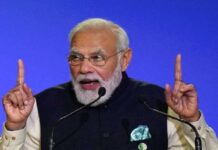 Year End Review: India Took a Big Leap in Addressing the Threat of Climate Change in 2021

Prathima - January 4, 2021
Covid-19 has accelerated the global political and economic rebalancing that had been underway for the last two decades. New power equations are emerging. China’s...