Western scholars and some in India try to reduce the Shiva linga and Shakti yoni, the two main Tantric symbols of ascending and descending cosmic forces – which are often represented by upright conical stones for the Shiva linga and circular stones for the Shakti yoni – to merely male and female sex organs with no higher implications. It is wrong to look at the linga and the yoni only in human sexual terms, just as it would be to see the Deities of Shiva and Shakti as only symbols of sexuality.

This polarity of creative forces in life is connected to the great dualities of nature from electricity and magnetism, to fire and water, the sun and the moon, and the forms of the mountain and the valley going back to Agni and Soma of the Vedas and similar to yang and yin in China. This universal duality and polarity of creative forces is the basis of Tantric Yoga, working with it, and through it returning to the transcendent unity behind it.

In the Sanskrit language, the word linga refers to a ‘chief mark’ or ‘characteristic’. As a term, linga is not simply a synonym for the male sexual organ. Linga indicates what is outstanding and determinative. In Yoga philosophy, the term linga refers to the subtle body (sukshma sharira), which is the dominant principle in our nature over the physical body and consists primarily of energy. The Shiva linga is also the subtle body and can indicate the upper region of the chakras from the heart to the head.

The problem is that the modern mind since Freud tries to use sex as the main means of interpreting life, extending to art and spirituality, according to sexual symbolism or the sex lives of the persons involved! This ‘sexual reductionism’ misses the deeper and broader sensitivities and inspirations within us.

Some scholars try to reduce Hindu Devatas to merely sexual symbols, as if a figure like Ganesha, with his head cut off by his father, was nothing more than another manifestation of the Oedipus complex, missing his deeper yogic implications altogether. Such psychological studies have been done on Christianity and Judaism as well. Freud, himself of Jewish background though an atheist, tried to reduce Moses to the Oedipus complex, starting off this trend.

Symbolisms of the Shiva Linga

The Shiva linga represents the ascending energy of consciousness and life in nature. We see this in such forms as the mountain, the thunder cloud, the tree, and the upright human being. Many lingas like that at Kedarnath – the most important Shiva site in the Himalayas – are rocks in the shape of small mountains. Many lingas are associated with light, the lingas of the Sun, the Moon and Fire. There are the twelve famous Jyotirlingas or light forms of Shiva at twelve special temples throughout India.

Tamil Nadu has special Shiva linga forms for the five elements with lingas of earth, water, fire, air and ether at special temples in the region. Each element has its Shiva linga or determinative force. The famous hill of Arunachala, where the great enlightened sage Ramana Maharshi stayed, is said to be the fire linga of Shiva.

Shiva lingas are associated with gold, silver or crystal, the light powers in the metal and mineral kingdoms. The Shiva linga is often described in terms of light or transparency. Shiva is said to be pure light in its primal undifferentiated state, Prakasha matra.

The Shiva linga is often a pillar of light. In special Vedic fire rituals, the fire could be made to rise in the shape of a pillar which could also then take the shape of a person! Dharma originally refers to what upholds things and can be symbolized by a pillar. The Shiva linga is the universal pillar of Dharma. The pillar is also an inner symbol indicating the erect spine and concentrated mind.

In terms of our human nature, there are several lingas or characteristic forces. The force of Prana is the linga or pillar force upholding the physical body according to the currents that emanate from it. This is the inner ‘Prana Linga’. The Atman or higher Self is the ultimate linga or determinative force of our nature that remains steady and elevated (transcendent) throughout all of our life experience, the ‘Atma Linga’.

The linga and the yoni go together on the level of opposites, as the upward and downward pointed triangles. The linga with the yoni below it, the standing stone and the ring base, show the union of male and female energies, not just in sexuality, but also as electro-magnetic forces and pranic forces, extending to the Kundalini Shakti.

In addition, the linga in its movement creates a yoni, just as a point in its movement can create a circle. We can see this in the circular movement of the stars, planets and nebulae, as well as diverse phenomena in the world of nature. The central luminary is the linga and its field of revolution is the yoni. The planets form a yoni or circle as they revolve around the Sun as the linga, of the solar system, its central principle or axis. Yet the Sun itself is revolving around other stars and creating a yoni or circle of its own.

Stonehenge and other similar sacred stone sites that have standing stones formed into great circles, show the cosmic male and female or Shiva-Shakti principles, though different names were used. The linga and the yoni are also united in the chakra or the wheel, with the linga as the axis and the yoni as the circumference. Each chakra of the subtle body shows the union of the Shiva and Shakti energies operative at its level of manifestation.

The experience of the Shiva linga in Yogic meditation is of a pillar of light, energy, and eternity, expanding the mind, opening the inner eye and bringing deep peace and steadiness to the heart. From it radiate waves, currents, circles and whirlpools of Shakti spreading this grace, love and wisdom to all. To concentrate our awareness in the linga is one of the best ways of meditation, putting us in touch with our inner Being, true Self and Witness beyond all the agitation and sorrow of the world. After Leicester, India Must Stand Up To Defend Hindu Interests Everywhere 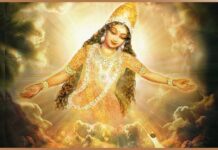 Prathima - July 11, 2022
Ma Kali is the primary Goddess of Yoga, the background Yoga Shakti, the power of Yoga or Kriya Shakti. Hers is the force that...

Prime Minister’s Outreach to Political Leaders of Jammu and Kashmir