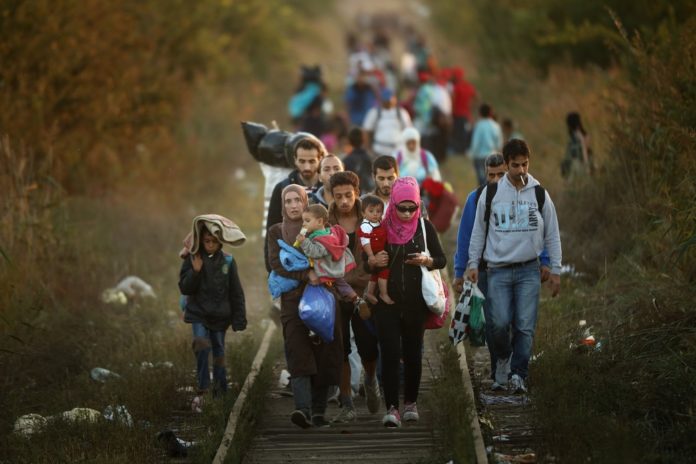 While there have been many articles that are published which explain why CAA is not unconstitutional, we need to evaluate how other countries have coped with immigration situations, such as the one being faced by India.

The Indian intelligentsia, left-leaning media, opposition parties and Muslim leadership have created an impression that the CAA (Citizenship (Amendment) Act, 2019) is fundamentally discriminatory as it excludes on the basis of religion. They claim that a secular nation like India, which guarantees ‘equality before the law’ to its citizens, cannot exclude Muslims from a particular benefit being extended to even illegal immigrants.

While there have been many articles that are published which explain why this Act is not unconstitutional, we need to evaluate how other countries have coped with immigration situations, such as the one being faced by India.

As recently as in 2017, President Trump passed an executive order 13769 which stopped refugees from Syria and suspended issuance of visa and other immigration benefits to nationals of seven countries. These countries were Iran, Iraq, Libya, Somalia, Sudan, Syria, and Yemen. The liberal media and intelligentsia of the West were quick to label this as discriminatory as all seven countries were Muslim. The matter went to Supreme Court of the country and was upheld in 2018. The Supreme Court agreed that as per the US law on Immigration (para f, Title 8, section 1182 of US Code), President is entitled to stop a certain section from enjoying the right to immigration. The law states that ‘Whenever the President finds that the entry of any aliens or of any class of aliens into the United States would be detrimental to the interests of the United States, he may by proclamation, and for such period as he shall deem necessary, suspend the entry of all aliens or any class of aliens as immigrants or non-immigrants, or impose on the entry of aliens any restrictions he may deem to be appropriate.’ Clearly America has the law to allow it to refuse entry to a specified group of people and it is not considered discriminatory by its Supreme Court. This, in spite of the fact that American Constitution is known to be one of the most egalitarian constitutions in the world.

In addition, US law also has a special allowance to provide special treatment to persecuted minorities. Under what’s known as Lautenberg-Specter Amendments, persecuted religious minorities like Jews, Christians, Baha’is fleeing Iran were allowed to jump the queue to gain citizenship in the United States. Originally, the Lautenberg Amendment was first enacted in 1990 as part of the U.S. foreign operations budget to facilitate resettlement of Jews from the former Soviet Union and it allowed tens of thousands of refugee Jews to get asylum via a special provision. As the worldwide refugee situation changed, the Lautenberg Amendment was expanded to include persecuted religious minorities in other countries, such as Jews, Christians, and Baha’i’s from Iran. This is clearly a case, where only persecuted minorities of Iran were given specific preference, which is very similar to what occurred under CAA, as Muslims of Iran were not given refugee status under this provision.

While UK does not prohibit any one from applying for asylum on grounds of religion, we can see that their Asylum office has given much lesser approval to asylum seekers of Bangladesh & Pakistan, as compared to other countries. See the screenshot below from a UK parliamentary report. You can see that only 11.9% applicants from Pakistan & 17.6% from Bangladesh were granted asylum, while applicants from other countries had a higher approval rate. That’s because the immigration officers probably used the same principle that CAA espouses – Muslims of Pakistan & Bangladesh cannot claim that they are persecuted. On the other hand, they have given much more approvals for asylum from other Muslim countries such as Iran or Afghanistan, from where most of the applicants were Christians and other minorities.

Unfettered immigration from Muslim countries, as necessitated by European Union rules, is one of the primary reason why British people chose to exit the European Union and reaffirmed their decision by re-electing Tory party led by Boris Johnson in late 2019.

Poland, Czech Republic and Hungary have refused to take Muslim immigrants from Syria. Their actions have created many repercussions as European Union is suing them to accept these immigrants, but, they are using their sovereign right to only accept immigrants that they are not uncomfortable with.

This Asian giant may not differentiate by religion, but, it rarely allows any refugees into the country. For example, Japan took in 20 asylum seekers in 2017 from nearly 20,000 applications. Recent low approval rates for asylum applications follow historic trends; in a 22-year period from 1982 to 2004, a total of 330 applications for asylum were approved, an average of 15 per year .

This East Asian country limits immigration by giving special preference to ethnic Korean workers over other foreign workers. Thus, if you are not an original Korean native or not married to a Korean, it is very difficult to get citizenship in South Korea.

As per Maxim Shevchenko, a member of the Kremlin’s presidential council on human rights, “Russia makes it very hard for Muslim refugees to come; it puts a lot of bureaucratic obstacles in their path.” It has been well documented that in spite of playing a major role in the war in Syria, Russia has rejected Muslim refugees from Syria. As per a report, since 2011 when the war started in Syria, only one Syrian national has been granted refugee status in Russia.

In 2018, Brazil deported 1200 Venezuelans back to their country, even though they had migrated to Brazil due to a severe crash of economy in Venezuela. While Brazil welcomed many of these migrants, but, they reserved their right to refuse migration to certain section based on their threat perception.

Some may argue that CAA should not have given preferences to non-Muslims and it would be better to reject all immigrants (just like Japan and some of the other countries do). But, we need to realize that this is partition’s unfinished task and as per Gandhiji’s wishes, it is the duty of the Government of India to secure justice for Hindus and Sikhs of Pakistan. Gandhiji even advocated war with Pakistan, if there was no other way to securing justice from Pakistan. This has been documented on page 39 of ‘Delhi Diary’ – a book that documents his speeches made during the period ranging from partition to his assassination.

In view of all the facts above, the BJP government seems well within its right to grant citizenship to a limited group of people.

This article was first published in Jammukashmirnow.com and it belongs to them

Prathima - July 27, 2022
A German friend sent me a YouTube video about an Indian, Santosh Acharjee, who had a near death experience. He is telling his experience...