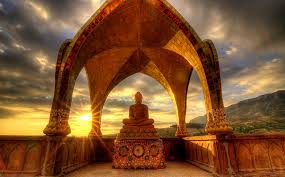 Our ancient scriptures and mythology talk of advanced technologies. Do we have it in us to innovate and make them realities?

Today’s world is fast changing. Life has changed in such a way that we can’t do without the various technological innovations and gadgets that surround us. But every scientific innovation, while enriching us in a material way also comes with its own baggage. Any invention that has a negative impact on our life or environment can’t be termed as a step towards progress and it also implies that we are no experts in science.

In this context it’s imperative that we are careful and deploy only those innovations that are ecologically sustainable. For those who look forward to a secure and fulfilling life supported by technology, our ancient scriptures provide a treasure chest of wisdom.

The Indian civilization was technically advanced thousands of years ago. Instead of ignoring them as old ideas that are no more applicable to us, we need to learn to embrace them. Our inability to do so would only be a loss to us.

Ramayana, Mahabharata and other pauranic texts provide us glimpses into the lives people led in those days. They had some excellent medical, scientific and technological innovations which, if followed, will stand out even today. Both Ramayana and Mahabharata provide us numerous examples of technological innovations. Notable among them is the kind of engineering deployed in Ramayana.

When Rama had to lead an army to Sri Lanka, they had to build a bridge over the ocean. Two engineers named Nala and Neela who were in king Sugreeva’s employment planned the construction of the bridge. The technology they used to build the stone bridge is a marvel even by today’s standards. This bridge, built only by stones exists even today. While most devotional accounts say that the stones floated on the sea as they wrote `Shri Ram’ on each stone, there is a scientific explanation to it. They used a particular variety of stones whose specific gravity was lesser than that of water.

Machinery and weapons in Indian Puranas

Ramayana talks of Pushpaka Vimana, a mythical aircraft. Devised by sage Bharadwaj, the aircraft incorporated mind control technology. While today we work on technologies like RC drones and motion sensor machines it’s extremely hard for us to even think of an aviation technology that comes mind control. We still have a long way to go before our technologies evolve to those levels.

Today a number of countries including India are spending billions to equip themselves with arms. Many, including India possess the nuclear capability too. A point worthy of noting here is that J.Robert Oppenheimer, the man who invented the atomic bomb has said that his innovation was inspired by Mahabharata. Both Ramayana and Mahabharata have detailed accounts of the use of lethal arms. They were using bows as launchers for destructive weapons with firepower comparable to today’s missiles and drones.

These weapons cited in our Puranas were in the possession of kings and senior warriors. They would use them when necessary in the event of a war. The best part was that the users of these weapons could also control them. Some of these included

These are only a few examples of the weapons that find mention in our puranas. In those days they had access to a range of similar weapons.  Creating safe and protected spaces was a power that Lakshmana possessed. He could create secure places and shift them to a location of his choice. The line that separated these secure places was referred to as Lakshmana Rekha. In Mahabharata, Sanjaya used to watch the war from a distance and provide a running commentary to Dhritharashtra. You can compare the technology used to the live telecasts and video streaming of our times.

There are many instances in the puranas that talk of the use of medical sciences. Dhritarashtra’s wife Gandhari had to undergo a caesarian kind of procedure as she did not deliver even after 21 months. They separated her fetus into a 100 fetuses which evolved into a hundred children. This reminds us of the way people deliver test tube babies. Vyasa had also mastered the stem cell technology in those days.

Mahabharata also talks about King Jarasandha who was part of a siamese twins. A tribal lady called Jara operated on them. Consequently the king was named after her. This illustrates that they knew how to separate siamese twins in those days.

Cloning is another medical technology that we discuss these days. Puranas mention a baby called Mandata who was birn to his father and not to his mother in the possible use of a stem cell like technology. Making women pregnant with the use of seeds of fruits and by the smoke emitted by burning meat were all some of the innovations the sages had mastered in those days.

Our puranas have characters with multiple limbs, heads and other organs. Ravana had ten heads. We can either look at these as myths or advancements in medical sciences that lead to super humans. Our puranas also talk of revitalizing humans with organs of animals. Lord Ganesha was revitalized by an elephant’s head.  When Daksha Brahma’s head was severed off, Lord Shiva brought him back to life with a goat’s head.

Shukracharya, the guru of asuras, apparently knew the cure for bringing people back from dead. It was called Mritha sanjeevini. In Ramayana, when Lakshmana was fatally struck down by Nagastra, a doctor called Sushena brought him back to life with Sanjeevini, a life sustaining herb.

Nutrition was also an area that people in our puranas had a deep understanding of.  They consumed nutritional food and also knew ways of surviving on limited rations while getting adequate nutrition.

The examples I am providing here are only a few. But our Puranas have numerous instances of what humans can achieve by living up to their potential and by coming out with pathbreaking inventions. At one time the fertile imagination of H.G.Wells and Jules Verne provided fodder for future scientific inventions. Our puranas have a wealth of these and it is up to us Indians to research in those directions and achieve technological breakthroughs. That’s how India can move forward and hope to lead the world of innovations.

Prathima - October 2, 2020
Several Indian states have enacted laws against forcible or fraudulent conversion (which according to the missionaries and their secularist allies are non-existent anyway). But...

Autism in India and how it impacts families