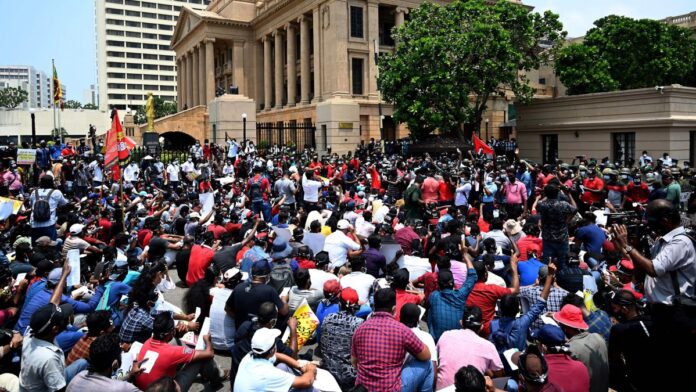 Last Saturday morning (9 July 2022) Sri Lanka faced a level of mayhem on the roads of not only Colombo but all of its major cities as that was most unprecedented but not truly unexpected. For a country that has struggled through ethnic stride, the social and political outbursts were first of its kind the nation witnessed. Over 100,000 Sri Lankans stormed the Presidential Palace of Sri Lankan President Gotabaya Rajapaksa while another set of protestors set Prime Minister Wickremasinghe’s private house on fire.

The violence and outburst forced the President to declare he would step down on 13 July 2022, while Prime Minister Wickremasinghe also promised to step down making way for an all-party government to be formed. For now, the Speaker will take over as the President for the next 30 days when Parliament will vote for a new leader.

From a sounding electoral victory less than two years ago to be slinking away in darkness to escape the wrath of people anger, the shifting political destiny of the Rajapakse family is going to be a cause of concern and worry and learning for not only the South Asian region but also much beyond. While violence can never be condoned but what one witnessed on the streets of Colombo and other parts of Sri Lanka tells a tale of political impunity and how the ultimate political tool lies in hand of the public. The island nation is now beset with instability and chaos but maybe this will be a beginning of a reset that puts the nation on the right track.

While there is little clarity about the next few weeks ahead, neither a new government nor any new leader will have an easy task of shepherding this Sri Lanka to safer shores, given the enormous economic challenges that it is facing. Certainly, the worst economic problem that Sri Lanka is facing did not happen overnight, but a series of quick developments led to a spiral that has led to this present impasse. The violent outburst was a culmination of the dire economic conditions’common Sri Lankas were forced to deal with for the past several months. Their patience ran out given the perceptible lack of attempt to resolve the crises by the leadership.

The people lacked essential food items including milk and the extreme fuel crises that were compounded with corrupt practices leading to cars and buses being forced to stay away from the road, forcing schools and other similar institutions being closed down, hospitals becoming inaccessible due to lack of transportation and untold miseries that larger sections of people had to deal with. The deepening economic crises had begun to raise its head from early this year and the apparent apathy of the government led to protestors demanding the resignation of the President and Prime Minister from March this year. Faced with severe daily hardships, the people’s ire was totally directed at the Rajapakse family that had held a tight clasp over the reins of the government.

To recall briefly Sri Lanka 16 November 2019, Gotabaya Rajapaksa, representing the Sri Lanka Freedom Party, defeated the ruling United National Party (UNP) candidate Sajith Premadasa, receiving a little over 52 percent of the votes. Gotabya, a former army officer and the longest serving Defence Secretary (2005-15) is better known for spearheading the action against the Tami militants -LTTE to bring the decade old war to an end. This electoral victory was said to be a collective affirmation for security concerns, in the aftermath of the horrific Easter Sunday attack (2019) on the churches that killed over 250 in Colombo, disrupting normalcy in the polity and having a ripple effect on both economy and society too. This priority for security and strong nationalist trends was also reflected in the parliamentary elections held soon after in August 2020, the Sri Lanka People’s Front, secured a two-thirds of seats, winning 150 seats of the 225 seats, (including five seats from its allies) that ushered in Mahinda Rajapaksa, the President’s brother as the Prime Minister. Two other brothers, Chamil and Basil Rajapaksas were also given key portfolios in the cabinet.

The republic nation was now run like a fiefdom. But this family political stronghold would soon unravel in the face of mass street protests that began in early 2022. Finally, the continued pressure by the people on the government led to the President placating the masses by removing Mahinda Rajapakse to brining in Ranil Wickremasinghe, United National Party leader and a former Prime Minister and a stalwart in Sri Lankan politics to take over as Sri Lanka’s 26th Prime Minister in April 2022.

But the prevailing problem runs deep, changing the government may be the first step but it will require sharp political economic and diplomatic skills to usher in peace stability and finally prosperity. The problem according to some analysts, has its genesis in Sri Lankan economy remaining highly export dependent even since gaining political independence in 1948. The ratio of Sri Lanka’s gross external debt stock to gross national income, which rose from 25 per cent in 1976 to 75 per cent in 1990, fell to 40 per cent in 2011 and then rose again to 69 per cent in 2020. The first spike in external borrowing coincided with several agreements with the IMF between 1971 and 1981, totalling more than special drawing rights (SDR) 450 million. The second spike, which saw the Sri Lankan government relying on the issue of international sovereign bonds (ISBs) to attract debt capital, was also accompanied by two major IMF agreements for a total of SDR 2.4 billion in 2012 and 2019.

Also the 26-year long civil war that ended in 2009 had put a major strain on Sri Lanka’s budget deficits. It had to borrow from other sources including multilateral banks to the tune of 22% (Asian Development Bank and the World Bank own 13% and 9%) of Sri Lanka’s foreign debt respectively. Sri Lanka has borrowed from China owning about 10% of its total foreign debt, followed by Japan, which also owns 10%. Although it seems standing at similar number, the situation with China has further complexities. It had provided US$ 7 billion in loans, including for the construction of a Sri Lankan port in Hambantota. This has been one of the most talked-about projects, given that Colombo in 2017 was forced to hand over the lease of the underused port to a Chinese company for 99 years on its inability to cover the loans it had received from Beijing. This is despite that fact that Colombo will still have to pay off five loans obtained from the Exim Bank of China to construct the Hambantota port. In that sense, the port lease cannot be interpreted as a debt-equity swap, which refers to a cancellation of debt in exchange for the equity of an asset. In this case there was no cancellation of the debt. Interestingly despite this, Colombo continued to do business with China.

President Rajapaksa had also introduced big tax cuts in 2019, which apparently cost the government income of more than $1.4bn in a year. When Sri Lanka’s foreign currency shortages became a serious problem in early 2021, the government tried to limit them by banning imports of chemical fertiliser leading to low agricultural produce. To offset this, Sri Lanka had to import food from abroad which depleted its foreign exchange reserves making its foreign currency shortage even worse. The Covid 19 pandemic added to the woes. Sri Lanka is a popular tourist destination but coupled with the recent terror attacks and travel issues during pandemic its healthy hospitality business, stalled. Many have also cited corruption as one of the factors leading to this downward economic spiral. Thus, Sri Lanka’s public debt to GDP ratio has risen from 91 per cent (2018) to 119 per cent (2021). Simply put, Sri Lanka had external debt service payments of $6 billion for the remainder of 2022 against foreign reserves of US$1.9 billion. And in April this year, the government announced that it would have to default on its foreign debt as it needed to hold onto whatever reserves for itself.

When the signs of the present economic crises were evident despite suggestion from many quarters, the government avoided working out an arrangement with the International Monetary Fund (IMF) and restructure its debt repayment plan in consultation with bond holders. It was only in last week of June that an IMF delegation arrived in Sri Lanka to discuss a bailout programme.

In the wake of the dire conditions, Sri Lanka has received substantial support from India who committed to more than $3 billion to debt-ridden Sri Lanka in loans, credit lines and credit swaps since early 2022. There is recognition of India’s backing, ‘India has come in a big way with a package to help Sri Lanka. If not for Indian assistance with fuel supplies on credit, Sri Lanka’s situation would have been even worse.[7]

The first job of the new government would be to ensure that Sri Lanka moves out of the chaos and political volatility through a show of good faith and implementation of good governance. The economic choices ahead are complicated and littered with difficult options but people will no longer accept leadership that pays little heed to peoples’ need and necessity. Sri Lankan leaders will have to put the interests of the people way ahead of any other priorities. Transparency and accountability will be the first step towards calming the outrage that common Sri Lankans are smarting under and inclusiveness will go a long way to usher in both political and economic stability. Prathima - August 27, 2021
National Hydrogen Mission aims to cut down carbon emissions and increase the use of renewable sources of energy while aligning India’s efforts with global...