Political winds are blowing in Japan as two key elections are approaching—the Liberal Democratic Party’s (LDP) presidential election in September and the Lower House election as its term ends in October. It would be interesting to see how Prime Minister Suga Yoshihide’s political future shapes up as he navigates the domestic politics—balancing public health during a pandemic and the Olympics dream on the one the hand, and the inoculation drive and economic recovery on the other. What will be the most immediate decisive issues as Japan heads for a snap election, most likely in September? How are the factional alignments taking shape within the ruling LDP? And, how the kingmakers within the party are positioning themselves?

Prime Minister Suga stepped into office in September 2020 following his predecessor Abe Shinzo’s sudden decision to depart from Kantei owing to health issues. Assuming the responsibility of life and livelihood of people in the middle of a raging global pandemic, especially with an impending election the following year, was certainly not an enviable position. In his maiden policy speech at the Diet in October 2020, Prime Minister Suga categorically stated that one of his top priorities is to host a successful Olympics to demonstrate victory over the COVID-19 pandemic.1 While he started on a high note with an over 70 per cent approval rating last year, public confidence in his administration has gone down with three states of emergency since then. As several prefectures in Japan come out of the third state of emergency and some remain in quasi-emergency on the heels of the Olympics, Suga’s political future hangs in balance with two key elections approaching. In the run-up to the Games and subsequently the elections, his public approval rating stands at 37 per cent in both the NHK and The Yomiuri Shimbun polls in June, 33 per cent in The Asahi Shimbun poll and 31 per cent in the Mainichi Shimbun-Social Survey Research Centre poll in May.

As Japan hosts the mega-sports event—Olympics (23 July–8 August) and Paralympics Games (24 August –5 September)—one of the crucial responsibilities of Prime Minister Suga would be to ensure that the nation’s much-touted “Recovery and Reconstruction Games” do not turn into a super spreader event. To this end, the inoculation drive has taken a new urgency. Suga has set out clear goals and aims to vaccinate all people above 65 years by the end of July. Japan has reached the goal of one million shots a day and has set up mass vaccination centres in Tokyo and Osaka managed by the Self-Defense Forces. With effective inoculation and a successful Olympics, Prime Minister Suga may be successful in winning public confidence in his administration before heading for elections.

Timing the snap election is also an important decision. The ideal situation for Prime Minister Suga would be to call the snap election in September, after the Paralympics. On the one hand, this will give him a crucial two months to intensify his vaccination drive and secure public health, on the other hand a successful Olympic Games will boost Japan’s pride as the host nation and generate positive public sentiment; both the conditions are absolutely crucial for Suga’s success in securing a public mandate in favour of the LDP in the Lower House election. However, it is worth noting that not all the variables are in his control. How the Delta variant unleashes itself as 15,000 athletes and several thousand officials enter Japan during the Games will have a direct influence on the election outcome.

The stakes are high as Japan has no way out of the Olympics; the cost and complexity of the Olympics contract outweigh opinion polls expressing public reservations in hosting the Games. A recent poll indicates that almost 86 per cent of those surveyed are worried about a possible surge in COVID-19 cases if the Games are hosted. Moreover, Shigeru Omi, who leads the government panel on COVID-19 response, has also weighed in by arguing that it is “unusual” to host the games amid a pandemic. The Tokyo Medical Practitioners Association has urged the government to reconsider hosting the Games. A few corporate leaders have also expressed their concerns, however, the decision on the Olympics is beyond the purview of Prime Minister Suga. The contract between the International Olympic Committee (IOC), the Tokyo Metropolitan Government and the Japanese Olympic Committee indicates that the decision on cancelling the Games solely lies with the IOC. Even though the IOC has the authority to cancel the Games in case there is “reasonable ground” to assess whether participants’ safety would be “seriously threatened or jeopardised”,the financial stakes are enormous since it dispenses 90 per cent of its revenue to sports federations and national Olympic committees. Billions of dollars signed in broadcasting rights further complicate the issue.

The once-postponed Tokyo Games costs around US$ 15.4 billion, which is double the original estimation of US$ 7.3 billion when Japan won the bid in 2013. The one-year delay costed US$ 2.8 billion. Meanwhile, some media estimates suggest that the Olympics would cost about US$ 25 billion. Olympics was an opportunity for Japan to not only steer foreign tourism but also drive construction investments. However, the economy will have to absorb the dent in the tourism industry as the pandemic has forced Japan to restrict foreign spectators during the Games. An estimation by the Nomura Research Institute argued that while cancelling the Games would cost Japan around US$ 17 billion, the economic loss would be much greater in case a fresh state of emergency is imposed.

Prime Minister Suga is therefore betting on rapid vaccination. However, Japan has been relatively behind the G7 powers with just 9.2 per cent of the population fully vaccinated and 11 per cent partially vaccinated (till 24 June 2021), compared to 48 per cent fully vaccinated in the United Kingdom, 45.50 per cent in the United States, 35 per cent in Germany, 29 per cent in Italy and 26 per cent in Canada. This is essentially because of the additional domestic trials and the two-step approval, initially by Japan’s Pharmaceutical and Medical Devices Agency (PMDA) and followed by the panel of experts in the health ministry, delayed the rollout by a couple of months. In addition to this, Japanese have displayed low confidence in vaccines, drawing from its previous experiences. However, on the heels of the Olympics, the inoculation drive has gained momentum.

Since a snap election is expected to follow the Olympics, LDP’s factional politics is likely to come into play. Even though Prime Minister Suga has not been affiliated with any faction, in the September 2020 elections, he managed to secure support from five of the seven key LDP factions. So, what has changed since then? Suga’s key contenders last year, both former Foreign Minister Kishida Fumio’s and former Defence Minister Ishiba Shigeru’s position has eroded. Kishida’s standing has been diluted following the outcome of the Upper House by-election in Hiroshima and Ishiba’s position is shaky with a few members leaving his faction. But, going into the party presidential election this time, Suga also has to factor in the reality that, unlike last time, rank-and-file members will be a part of the process.

In the snap election, the kingmakers in the LDP, including former Prime Minister Abe Shinzo, Deputy Prime Minister Aso Taro and Secretary-General Nikai Toshihiro, will throw their weight behind Prime Minister Suga to avoid any mixed messaging to the public, and consolidate a two-third majority in the Lower House election. But how the factional politics take shape in the party presidential election remains to be seen. An ideal situation for Suga will be to secure a victory for the LDP in the crucial Lower House election, which will further secure his position as the party president. Meanwhile, it is important to keep an eye on how Abe is positioning himself back into the game. While he supports Suga, he has also indicated a preference for Foreign Minister Toshimitsu Motegi, Chief Cabinet Secretary Katsunobu Kato, Policy Research Chief Hakubun Shimomura and former Foreign Minister Kishida as Suga’s successor. Furthermore, media polls have floated predictable names including that of Minister for Administrative Affairs Kono Taro, Environment Minister Koizumi Shinjiro, and former Defence Minister Ishiba as topping the charts. But the LDP election is about manoeuvring factional politics rather than popular support.

As Suga heads for two key elections, he has made a mark with his digitalisation and decarbonisation drive in domestic politics and demonstration of Japan’s leadership in global platforms, be it the G7 summit or the Quad. He has also ensured that he is the first foreign leader to be hosted by President Joseph Biden following the change of guard in Washington. As he seeks public mandate with just one year’s report card amidst a pandemic, Suga’s political future is contingent on rapid inoculation and a successful Olympics. 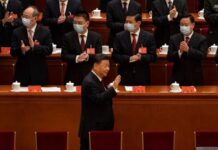 Prathima - November 10, 2020
As many people across America celebrate the defeat of Donald Trump, it is possible before he exits the Oval Office, Trump could make some...

Outcomes of the First Biden-Erdogan Meeting